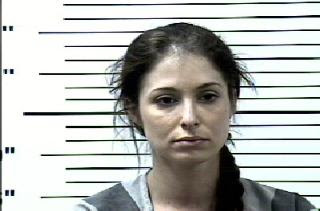 A woman from North Carolina who has allegedly been stalking a Carroll County, Ar man since college has been charged with two counts of attempted murder for allegedly stabbing the man and his girlfriend Wednesday.

Authorities say she Lauren Gay Casper, 29, stabbed Paul Crider, 31, and Amy Fisher, 38, outside the Crescent Hotel in Eureka Springs after the couple agreed to meet with Casper to talk things out.

Crider told cops that when the two women got in the vehicle Casper attacked Fisher with a knife, repeatedly stabbing her. When Crider got out of the vehicle to help Fisher, Casper stabbed him as well.

Within minutes of the assault, a local couple called police and reported that a woman driving a white car with North Carolina plates had hit their car on Spring Street and fled. When cops ran the plate they found that the car was registered to Jeffrey Casper of Cary, N.C., who is Lauren Casper’s father. Authorities say Jeffrey Casper, who has been cooperating with them, told them he did not know his daughter had taken his car.

Crider called police the next day after he received an email from Casper asking him to come alone to meet her at the Fly Rod Inn just west of Eureka Springs.

so can you tell me more info about Lauren casper?
email me:
tjlaw415@aol.com