UPDATED~~CAPTURED~~Mountain Grove Man Charged In New Years Eve Stabbing On The Run From The Law: 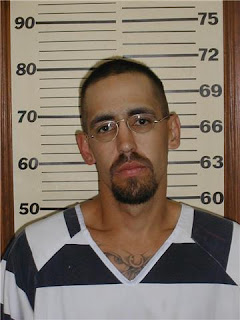 
Authorities are looking for a Mountain Grove man in connection to a stabbing overnight at a Texas County bar.

Casey Blair, 37, has been charged charged with second-degree assault for allegedly stabbing Brandon Bolfing multiple times in the chest and stomach in the parking lot of Midway Bar & Grill just east of Mountain Grove.

Lt. Melissa Dun of the Texas County Sheriff's Office says cops were called to the bar a little after one this morning (01-01-10.) She says that witnesses told cops that the two men were allegedly involved in a verbal altercation inside the bar and that Blair was asked to leave.

A press release says that a short time later Bolfing exited the bar and was assaulted in the parking lot. Bolfing, who then made his way to the Mountain Grove police department, was airlifted to a Springfield hospital where he remains in serious condition in the intensive care unit.
The Texas County Sheriff's Office needs your help in locating Blair. If you can know where he is you're asked to call the Texas County Sheriffs office at 417-967-4165; Mountain Grove Police at 417-926-5181; the Wright County Sheriff’s Department 417-741-7576 or 9-1-1.
UPDATE 02-02-10:
Casey Blair was captured a week and a half ago in the Bootheel according to Lt. Dunn. He is now in prison on other charges while awaiting trial for the alleged New Year's Eve assault.
Posted by Kathee Baird at 12:09 PM

I can't believe what kind of person could pull a knife and stab somebody like that, not thinking that they might kill them, or thinking that he has children out there who needs their daddy. I hope they catch him before he hurts anyone else.

I understand that the stabbing was a terrible thing, but nobody has ever mentioned the fact that Casey was assulted by that individual first!!!

We live in a small town, everyone that knows Brandon, also knows that he is always trying to pick a fight. Brandon has been involved in many fights. If fact, Brandon was not the first one hurt that night, Casey was. Casey has spent alot of time in prison, and has had to fight to simply survive. Casey was NOT the only one that made a 'wrong' choice that night!! So, who ever made that last comment was exactly right!