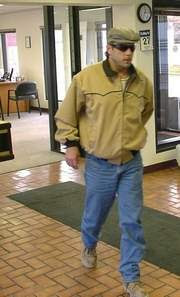 The FBI and authorities in Branson are looking for a man who held up the Great Southern Bank on the strip during this afternoon.

Cops say the man entered the bank about 12:30 and told the teller he had a gun and demanded money.

Police say after receiving an undisclosed amount of cash, the suspect fled in a silver pickup with Arkansas license plates. That truck was last seen headed east on Highway 76.

Authorities are looking for a white man in his early 30s, about 5 foot 9, weighing 160 pounds. He was wearing a brown cap, sunglasses, light colored zip-up jacket, faded jeans and tan work boots. 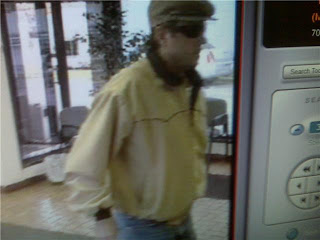 If you have information about the incident you should contact the Branson Police department at (417) 334-3300 or 9-1-1.
UPDATE:
Chad Moreland, 37, was taken into custody tonight by the Arkansas State Police at his home near Roland. He is being held in the Pulaski County, Arkansas jail pending extradition back to Missouri.
Posted by Kathee Baird at 2:50 PM