Berryville Lawyer Accused Of Selling Meth Out Of Home Office Wants To Turn It Into A Rehab Center: 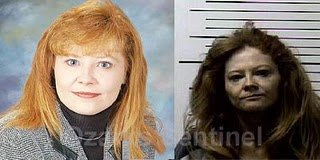 The Berryville, Arkansas, attorney accused of allegedly selling meth out of her home office last October wants to turn the house into a drug rehabilitation center.

Cindy Baker brought the proposal to the Berryville Planning Commission last week, but commissioners aren't sure if a live-in rehabilitation center in the middle of downtown would be permitted by city ordinance. They tabled the request while they continue to conduct research on the proposed rehab center.
- 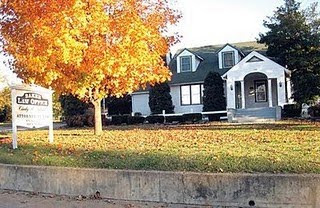 Ron Hutchins, who operates the non-profit Freedom Seekers recovery program in Blue Eye, Mo., told commissioners that zoning approval would be required before approval would be granted by the Arkansas Department of Corrections for the proposed rehabilitation center.
Posted by Kathee Baird at 9:42 AM

If i was in her shoes I would try to "look" good as well. Im tryin to give her the benefit of the doubt here but I'm suspicious of her motives and sincerity. Carroll County is in DESPERATE need of a drug rehab (at least an out-patient one) but I don't believe the middle of town would be too smart for inpatient. And, if this happened would it be for men or woman? both? Us addicts are crying out for help but her motives are fake and selfish::)) thanks for ur heartfelt jesture Cindy but are you willing to still sit in jail while ur home is helping the diseased addicts in our county? Or is ur motive to be the "Recovered Hero" that is now helping all that you helped destroy? One thing about addicts that have hit rock bottom and are ready for help is that we will NEVER reach out to a fake selfish person....I'll still try to give you the benefit of the doubt tho. P.S. Im glad i never met you, but I pray that ur heart is in this and I pray that you do care enough to stay clean for ur "cause". Oh yea, one more thing. Cindy's house would never prosper in this area because all the hurting addicts see right thru fake people. maybe in 7-8yrs of her proving herself and motives.