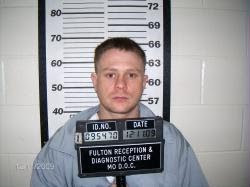 A man from Aurora who beat up a couple of employees at Wal-Mart after he was caught stealing will be sentenced in February.

Lawrence County Prosecutor Robert George says that it took a jury about eighty minutes to return with a guilty verdict against Ben C. Sitton for second-degree robbery.

Sitton stole an energy drink, a pair of boxers and attempted to steal a bottle of cologne in January of 2009 when he was confronted by store employees as he was leaving the store.

"This defendant could have returned to the store with employees and probably would have been released that day with a summons for misdemeanor stealing," Lawrence County Prosecutor Robert E. George said in a news release announcing Sitton's conviction.

"Instead he chose to take swings and strike two employees who were attempting to stop him."

Friend was able to catch up with Sitton and grab a hold of his clothing but Sitton "hit her in the chest causing her to lose her grip," according to George.

George says that instead of complying with the employees, "he chose to take swings and strike two employees who were attempting to stop him."

Sitton, who is currently serving a four year sentence for resisting arrest, has previous convictions for stealing and possession of a controlled substance.