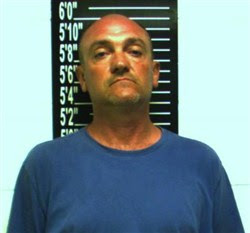 A man who allegedly posed as a retired ATF agent in Stone County is scheduled to stand trial on charges of impersonating a law enforcement officer on February 23, 2010, in Galena.

Stone County Prosecutor Matt Selby says that Mark Sager, 48, aka "Maverick", lived on a houseboat at Indian Point at the time of his June 2009 arrest and alleges that the man told several local aw enforcers and other people in the community that he was an agent with the Bureau of Alcohol, Tobacco and Firearms.

Stone County Sheriff Richard Hill says that, " 'Maverick' had an old police car that he outfitted with lights, sirens and two way radio communications. He allegedly told cops that although he was retired, he kept his car ready to assist where needed, and carried a firearm as protection from people he had dealt with in the past. He would also walk around the marina with an exposed weapon, handcuffs, pager, phone and a spare magazine on his belt."

Hill says" 'Maverick' "would back" up law enforcement officers on different occasions by arriving at the scene of a traffic stop or a call for service. Law enforcers became suspicious of 'Maverick' when he started becoming a fixture at different crime scenes.

When he showed up to assist officers on a traffic stop on June 13th in Indian Point cops decided it was time to run a criminal background check on the man.

What they found was disurbing. Sager had been charged with capital murder for the September 2, 1977, death of 14 year-old Julie Wittmeyer. Wittmeyer was a classmate of Sager's in Platte County (northern Kansas City.) A jury convicted Sager of manslaughter in Wittmeyer's death.

Sager briefly returned to his houseboat and a restaraunt he co-owned at Indian Point but has since relocated to Kearney, Missouri, according to court records.

An order of protection was filed against Sager in Green County in late June, and records show it was promptly dismissed by the woman who asked the court for protection from her "boyfriend" didn't file the necessary paperwork for the ex parte in the correct county.

****Greg Brock contributed to this report.
Posted by Kathee Baird at 1:44 PM