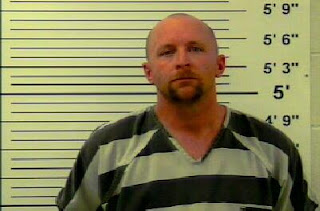 A capital murder trial that has been postponed by weather several times this year alone will get underway tomorrow morning (03-23-10) in Carroll County Arkansas.

Prosecutor Tony Rogers says that Marty Alvard,'s trial is scheduled for two weeks. Alvard's lawyer will use a not guilty by mental disease or defect defense for his client.

Prosecutors say that Alvard, 40, allegedly stabbed his mother-in-law Janice Sue Allen, 60, in the neck and then hit her over the head with a baseball bat after "she gave him the cold shoulder " and he "just snapped" on April 25, 2008, according to court documents.

Jo Ann Alvard told investigators that she was in the bathroom when she heard "a loud kthunk sound"....like someone being hit and heard her mother moan.

Jo Ann told investigators that "she was afraid to come out because she didn’t know if he was going to hurt her. Jo decided to come out of the bathroom and Marty met her at the door and pulled her into her bedroom. Jo advised that once in the bedroom Marty jerked her pants down and he was going to make her have sex with him. Jo asked Marty if he had done something to her Mom, just so she would have sex with him, and Marty didn’t answer."


She says she screamed out for her upstairs neighbor for help but that her estranged husband pushed her onto a bed, covered her mouth and nose and said, "she couldn’t do that and if she did it again he would kill her."

Allen, 60, of Berryville, was staying with her daughter to help her as she recuperated from brain surgery.

Jo Ann Alvard told cops that Marty Alvard forced her to leave the apartment, and when she attempted to yell at a passerby to check on her mother but her husband threatened to kill her again.

The couple then drove to Marty Alvard's place of employment in Golden, Mo., where he told his boss "he had done something bad," according to court records. Alvard's boss told them "they needed to go to the church and meet with the Pastor in Oak Grove."

On the drive to Oak Grove, Jo Ann Alvard rode with her husband's boss, Wendell Parton, who allegedly wouldn't let her use his cell phone so she could get help for her mother. When they got to the church, Alvard's employer convinced him to hand over a loaded gun he was carrying because he thought Alvard might try to commit suicide.


Charging documents show that a 9-1-1 call came into the Gren Forest police department about 1 p.m. from Marty Alvard who said that, “messed up and his mother-in-law was 10-7”. 10-7 is local law enforcement code....10 means out of service or deceased.


When cops entered Jo Ann Alvard's apartment they found Allen sitting in a chair, her body patially covered by a throw rug. Her glasses were on the floor nearby, an aluminum baseball bat was propped up against a wall near a door.

In recent motions filed with the court, Marty Alvard’s lawyer, Bill James of Little Rock, asked a Judge Kent Crow to limit the amount of testimony and opening statements about a previous incident involving Marty Alvard and a knife. Judge Crow said he would limit what Prosecutor Tony Rogers could say about the incident in his opening statement and rule further as testimony was entered into the record.

Crow made similar rulings on several other motions including one pertaining to Jo Ann Alvard’s journals and information about Marty Alvard’s alleged pornography habits.

Rogers filed one motion asking Crow to order Alvard's parents, Billie and Connie Alvard, to answer questions from the prosecutor under oath in deposition prior to trial.

Prosecutors believe that control issues led Alvard to murder Allen. Court records say that Marty Alvard was “losing control” of his wife, who had “walked out on the defendant.”
Posted by Kathee Baird at 8:46 AM