Peter Newman, 34, Memphis, waived a preliminary hearing Tuesday in Taney County Associate Circuit Court on the first charges of statutory sodomy and sexual misconduct.
Additional charges were filed against Newman at today's hearing. They include five more felonies, including statutory sodomy, sexual misconduct and enticement of a child...he waived those as well. 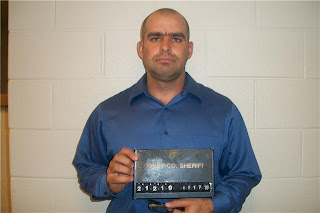 Now, do all you bleeding-heart-supporters out there STILL support him?

Kathee, thank you for keeping the public informed about this very important case impacting thousands of camp families.

Is there another searchable online database in addition to case.net where we can see court documents?

For such a serious crime, Im surprised they assigned signature bonds.

I believe that a December court date has been set for Pete to return to Taney County.

You can read the full report from police investigators regarding the newest charges at the Springfield News Leader site where they posted a story regarding the new charges brought against Mr. Newman. Link on right side of page at the story.

This Kanakuk dad/trial lawyer sees only one possible conclusion, Kanakuk will face lawsuits over this.
I am so conflicted over this. How would I handle it if these young men or their parents came to me wishing to recover from Kanakuk for their damages? I would represent them. That is my oath to the law. I know that some find this in conflict with God's word. I do not.
The bible says we should not drag each other into court over church matters. Is this one? What church leaders do you take this conflict to for resolution if it cannot be worked out among the parties? Who determines what will right the wrongs done to these
Is "Kanakuk" a Christian? I believe that many of its leaders are Christians. I do not believe any organization should ever be labeled as Christian. I think I have said here before that "Christian" make a great noun and a terrible adjective.
Does Kanakuk have insurance? Is that a doubtful faith? Absolutely not. It is prudent stewardship of its leaders.
What about their duty to protect the thousands who pay thousands to spend time at Kanakuk every year? I hope that Joe and the rest take full responsibility for any mistakes they MAY have made. And more than that, I hope that whatever lawyers the victims find to represent them will seek the Truth and represent them with dignity.

Nice plug for your little lawyer business! I hope no one contacts you to represent them. My husband is a trial lawyer, an extremely brilliant one. But he would never stoop so low as to advertise on a blog. And your views are all wrong. Kanakuk would have never allowed this had they known. Joe White is so torn up and heartbroken over this. To try and bring down a camp that has done so much good in the community over someone else committing a crime is disturbing. Pete Newman committed the crime, not Kanakuk. Yes, now no counselors can't even contact campers without a parent's consent. They can't even right them a letter thanks to Pete Newman. So I guess that is what the world is coming to. I guess we can no longer let our kids go get ice cream with their counselor when they are in town. So sad. This is now what Kanakuk is having to do.

Ummmmm....what plug did I give to a lawyer and an attorney has never advertised on my blog or the paper I write for?


BTW.."They can't even right them a letter thanks to Pete Newman." That should read write.

Hassan was the ONE who shot those people at Ft. Hood. But it was his authority who ignored the warning signs seen by so many. This is EXACTLY what happened here. So the camp DOES share resposibility here!!

Hmm. As a former kamp staff who modeled my "out of kamp" activities after Pete Newman's outward personality - going out of my way to visit kids, write letters, call, etc., I think the 10-20 anonymous doesn't realize how dangerous this really is.

I have really tried to "lay low" with the kids I know since this news broke, because of how badly Pete has injured trust in all counselors and former staff. I'm getting married next spring, and want to invite camp families, but I feel like all of my activities - the years of visiting and ministering - are now called into question because of what Pete did.

So "counselors can't contact campers without a parent's consent." I think this is a GOOD RULE. And I say this as a counselor who often contacted campers without parents' prior consent (of course, I also always made an effort to get to know parents, but, of course, PETE DID THIS TOO).

There are predators out there. And anyone who works with kids needs to have a system for CYA (i.e., limit one-on-one time to public, don't share a room with a kid when staying with his family, let the kid reach out with parents' permission and not the other way around before visiting ) or else this sort of thing can, and will, happen again. Or worse, some kid will get his feelings hurt and decide "I'm going to ruin this guy's life and say he touched me."

Pete's deception is deep, but it's not unique. Parents and Kanakuk are right to put some controls on the way counselors contact campers during the off-season. And again, this is coming from someone who would take a spring break "visit kids in Texas" tour every year. It was a wonderful thing to do. But it shouldn't happen without direct parental guidance and supervision, ESPECIALLY now.

In response to the angry wife of the extremely brilliant trial attorney:

Counselors can still write our children.They can contact them. Kamp just sent out a specific explanation of this new policy and it is also posted on their website. Counselors just need to follow tighter guidelines. Good! I would still allow my child to go get ice cream with a counselor. I hope that one asks. Will I be more careful and hopefully more discerning this time? Yes, of course. Trust is a fundamental part of any relationship, and if our children are going to learn how to have friendships, they will need to learn to trust. It is our job as parents to help them know who to trust. (This is coming from someone who trusted Pete - had him in our home for a weekend.)

We need to be careful not to generalize or conclude things without all of the facts. I truly believe that Joe is torn up about it. My husband saw him in September and attested to that. Of course he is. We cannot assume that he did not have any idea that Pete was struggling. We just can't. 10 years is a long time. My thought is that Joe's mind could never conceive the heinous acts that Pete comitted, so that when (and if) concerns were brought to him, he addressed them in a way that he thought to be appropriate at that time, with his understanding of the problem.

Emotions are running high, and will continue to do so for a long time. The unfolding of these proceedings is nothing that we could prepare for.

My prayer is for the protection of young souls, wisdom for the judge, attorneys, parents, and clarity of thought for Joe and others involved as they seek to understand how this happened so that they will be able to provide a safe place for our children once again.

Hassan was the ONE who shot those people at Ft. Hood. But it was his authority who ignored the warning signs seen by so many. This is EXACTLY what happened here. So the camp DOES share resposibility here!!

I know I am not the best reporter out there, but at lease I try.

I bet you were a bully as a kid, and are still one as an adult.

If you don't want to read the blog, don't.

I am not going to let this case fall by the wayside just because you want to throw jabs at me. GAME ON!

THAT SHOULD HAVE SAID LEAST

"Hassan was the ONE who shot those people at Ft. Hood. But it was his authority who ignored the warning signs seen by so many. This is EXACTLY what happened here. So the camp DOES share resposibility here!!"

What is it that makes you think this? Do you have proof? I don't know if anyone else would agree with you on this.

Kathee, can you tell if Pete is wearing his wedding band in that picture? It will not enlarge.

Did Hassan go to Kanakuk? Was he friends with Pete? I don't get the connection.

"Did Hassan go to Kanakuk? Was he friends with Pete? I don't get the connection."

Well that's hilarious. At least we're getting a little chuckle from this whole thing.

I think what the guy was suggesting is that LIKE Hassan, Pete had been giving off warning signs for a long time. Parents had complained to Kanakuk authorities. Pete had been placed on "probation" of sorts. Sent for counseling. Warned. Made to sign agreement to what he could and couldn't do around kids. Some parents obviously had reservations about him. Kamp knew that. Did nothing. And here we are today with VICTIMS of PETE. THAT is the parallel with Hassan. The gov't looked the other way, instead of getting rid of him before this tragedy. The gov't is partly responsible for these deaths. Kanakuk is partly responsible for these molestations by their man.

Anyone know what sort of time he is facing? Life?

True. Hope to see him repentant. It would really help people be able to forgive and move on with their lives.

Not sure he ever knew the Lord.

In looking at https://www.courts.mo.gov/casenet/cases/searchDockets.do it appears that some of the charges against Pete have been dropped. I am not an attorney so I may be ready it incorrectly but it appears there are two charges against him now. Does anyone know what happened.

The charges have not been dropped. They haven't been listed since the case was bound over to Circuit court. It is just in the process of moving to the higher court. The charges are still the same as they were...

What if Peter Newman decides to do the morally/spiritually responsible thing and confesses to these crimes against innocent children? What happens then??

Will anyone be at the courts tomorrow to keep everyone updated?

They are just going to enter a not guilty plea. It will take all about 10 minutes.....or he may plead guilty, but I don't see that happening.

My son went to camp there when he was 13 and he came home and told me that his counselor had his whole group after showers drop their towels so he could spray their penis's with something to keep them from getting bug bites. This didn't sound right to me so I called the camp and they told me they would check into it and call me back. They called back a few days later and told me it never happened that this was not camp protocal. I believed my son and never sent him back and anytime I would mention it to anyone in OKC they would look at me like we were crazy so I just stopped mentioning our "bad" experience. Just happy that I went with my gut instinct and took my child at their word!