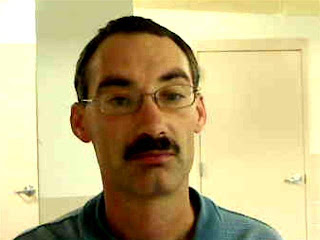 A former band teacher at Neosho High School has been arrested on several sex charges involving former students.
Brian Matthew Rash, 37, Joplin, is accused of molesting two former male students in Oklahoma when they were about 11 year-old, those boys are now in their early twenties.
Rash had been the band instructor for Joplin Catholic Schools from 1995-1997. He then went to work for the school system in Wyandotte, OK, from 1997-2000--he then worked for at Neosho High School from 2000-2007.
Rash called authorities to his home in Wyandotte, Oklahoma home on June 24th to report that someone had destroyed and defaced his property.
In the probable cause statement filed with the charges, Deputy Aaron Bachman of the Ottawa County Sheriff’s Department said he discovered several items thrown about the yard, the doors to all three of Rash’s vehicles open and that someone had written "you are a child molester" down the side of Rash's truck in red crayon.
When Bachman asked Rash if he had any idea who could have committed the crime, he told the officer he believed that it was a former student whom he had given private music lessons.
Rash told the deputy that someone had plastered his property with fliers stating that he was a "child molester" three years ago.
When authorities questioned the former student, he told them that Rash had sexually molested him on multiple occasions.
He told cops that the sexual abuse started on an overnight band trip to Tulsa when Rash allegedly called him to his room, "to discuss band stuff."
The young man told cops that Rash plied him with hard liquor then began rubbing his shoulders. He says that after he was drunk, "Rash performed oral sex on him and flipped him over and put his tongue in his anus."
The victim says he passed out and when he awoke, "Brian was fondling him and trying to have anal sex with him."
The young man recounted for cops another alleged incident in which Rash was taking him home from a music lesson. He says Rash stopped the van and told him to crawl in the back to help him unload something....when he did, he says, "Rash raped him."
The victim also told investigators that Rash sexually assaulted him in the music room at a Wyandotte school.
The victim told investigators that he never told anyone about the alleged abuse until he was receiving grief and substance abuse counseling after the death of his brother.
Another former Wyandotte student of Rash's has come forward with similar allegations against the former band teacher.
During an interview September 18th with Dr. Debra Holmes, a psychologist hired by Rash's attorneys who is on the multidisciplinary team, Rash reportedly confessed to performing oral sex on a former band student at Neosho High School.
Felisa Rash, Rash's ex-wife, told investigators that Rash kept the French doors to the music room in their house locked when he gave private music lessons.
Felisa Rash says she and her ex-husband repeatedly fought over the first victim because, "he spent a lot of one on one" time with the the boy during 2000-2001.
Rash's former wife told cops that she found tickets to the symphony in St. Louis in May of 2001 and thought that Brian was going to "surprise her for their anniversary."
Rash reportedly told his ex-wife that he was planning on taking the first victim and spending the night with him. She says she and Brian got into a fight and he stated, "that he loved _____, and couldn't imagine his life without him."
Rash has been charged with two counts of first degree rape, four counts of rape by instrumentation and two counts of indecent proposals to a child.
He is being held in the Jasper County jail on $650,000 and is awaiting extradition to Oklahoma.
Posted by Kathee Baird at 12:42 PM

wow! a lot of stuff like this happens around these parts. do you know anything about Devan Teas? It would be great if i could get info on him. i know he had 7 warrants out for his arrest and rumors have it that he raped someone mom and is in jail. how would i be able to confirm this? We were close, and i just want to talk to him again... help him get his life straight if at all possible. He is 19. I think his birthday was in September, the late teens. contact me via killerpoet52@yahoo.com and thankyou.

Contact the circuit clerks office and ask for a copy of the probable casue statement.

ok, im somewhat related to Brian Matthew Rash...but now i dont know who he is anymore, he used to be so fun and kind but is now a molestor and is in jail...i dont know what to do

you should investigate why a WCHS English teacher was "released from her contract," in other words - FIRED, suddenly a few weeks ago. The district is being hush, hush about this - because she had an affair (last Spring) with another married teacher, then most recently she had sex with a football player - star player that is. It's interesting, because now this teacher can go to another school district, with no record of this occuring and teach, be around kids, putting other students in danger of being around a molestor.

WOW, he used to give a lot of the boys back rubs when he was teaching at the High school back in 2003 or so. Would always make it look like he was giving them a compliment. Was always obviously akward and creepy. Even heard that he's had Brennan Baum over for pool parties. Not sure I know who that is, poor kid.

this is devan teas. Anonymous posted a comment and i would like to give them their information. hollla back yo. floppyteas@yahoo.com
or use myspace like every other american doucheface

there is a comment by killerpoet52@yahoo.com about me and i would really like to know who that person is. i am devan teas

i was a student of brian rash for the entire time he was at wyandotte, i do not know if he is guilty or not, i know i had alot of issues with him as did many others, i hope its not true but these days you just never know, even teachers cannot be trusted

I was a student of Brian Rash's for a time. I wish I knew why he did it. He didn't hurt me when he could have.