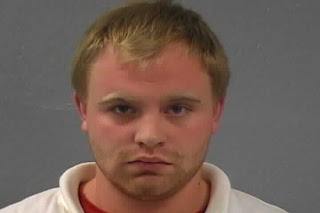 Police are continuing to investigate several other burglaries and a string of arson's in the city to see if there is any connection to Higgins. Further charges are possible.

Higgins has been charged with burglary for thefts at the following churches:

HEY KATHEEEEEE your a fucking retard this is my husband u bitch, u wana b famous u know y he did this????? to take care of his children mother father and all of his 8 brothers and sisters you greedy bitch now shutup