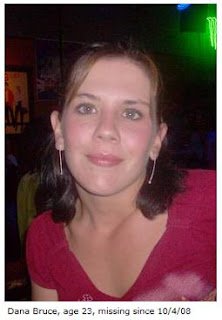 It was one year ago today that a young mother from Sedalia went missing.

Family members and friend of 23 year-old Dana Bruce will gather in Liberty Park at 2 p.m. today to release purple and white balloons, and then again at 8 p.m. tonight for a candlelight vigil at the Pettis County courthouse to commemorate her disappearance.
Bruce was reported missing on October 5, 2008, after she didn't come home after meeting a man in a red truck at Malone's on Main the previous night.
Cops questioned a 35 year-old man who they named as a person of interest not long after Bruce went missing. The man skipped town after investigators told him they wanted to re-interview to him about Bruce's disappearance.
The man who worked as a pipe fitter near Sedalia was arrested in Atlanta, GA, for driving on a suspended license and possession of marijuana. 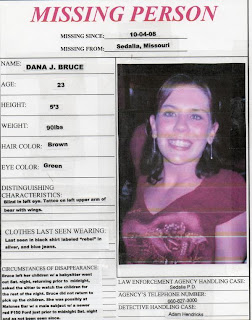 The lead detective on the case, Marty Holdeman, has retired but continues to work the case as a reserve officer for the Sedalia police department.
Holdeman tells the Sedalia Democrat, I have followed every lead, including digging up a fresh grave only to find a dead dog, enlisting the help of the Missouri Water Patrol to search a pond, and searching four large acreage farms in Pettis County and several homes and smaller acreage properties. The department had a tool built in order to drag ponds and rivers and respond more quickly to leads.
Police have been unable to narrow a list of “people of interest” to a particular suspect. 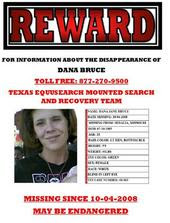 Commander Adam Hendricks with the Sedalia police department says the most recent interrogation in Bruces disappearance was conducted last Wednesday. Hendricks says investigators have chased a lot of leads and have not lost focus on the case.

If you have information that can help authorities in the search for Dana Bruce, you can reach Hendricks at the Sedalia police department at 660-221-8845 or Kevin Bond at the Pettis County sheriff's department at 660-827-0052.

*******You can link to a website devoted to helping find Dana Bruce here.
You can link Dana's MySpace page here: dana_jane22.
Posted by Kathee Baird at 9:35 AM