Karen Davenport, 32 was originally charged with involuntary manslaughter in 2005 starvation death of her daughter, Hannah, by former prose 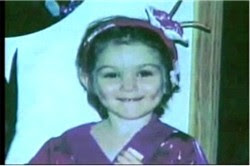 However, after reviewing the case in 2007, Janice Durbin, Greeding's successor, dropped the manslaughter charge and replaced it with second degree murder.

Durbin also amended the charge to include failing to provide adequate medical treatment for the girl as an alternative charge in the case against Karen Davenport.

Durbin said that she filed the amended charge because, "I would like the jury to be able to deliberate every aspect of this case."

When Hannah Davenport was born she had a defect in her digestive tract that made it difficult for the toddler to have bowel movements or to digest many foods. She needed surgical intervention for the problem when she was two years old.

Investigators say that doctors ordered a special diet for the little girl that was ignored, and that that was a contributing factor in her death.

Dr. Keith Norton, a forensic pathologist in Springfield, testified that Hannah Davenport suffered from dehydration and bowel infections before she died.

He said if the little girl had received medical attention in what was to be her final days, or even hours, she may have lived.

Hannah was only three and a half feet tall, and weighed less than thirty pounds when she died.....the result of malnutrition and dehydration according to the medical examiner.

Hannah died from a perforated colon.


NOTE: Hannah Davenport's grandmother, Linda Walsham, is also charged with second degree murder in the little girls death. Her trial is set to begin two weeks after her daughter, Karen Davenport's, on May 14th.