It was a relative who reported Cassidy Rainwater-Paul missing in late August, according to her estranged husband, Zachary Paul.

Paul says he and Cassidy fell in love fast and hard in 2009 and that it flamed out in 2012.  "When it was done, it was done.  She had her boyfriend's and I had my girlfriend's.  The reason we were still married is because we couldn't afford the divorce."

There was an incident earlier this year with Cassidy that involved police and DFS resulting in PP being placed with Cassidy's grandmother, Cora Terry, (who is really her aunt,) according to Paul.  Zach says the last time he heard from Cassidy was in mid-July following a supervised DFS visit that Cassidy had with their son. "We used to text and Facetime once a week or at least every other week but all of a sudden I quit getting phone calls and getting phone calls answered."

"I moved to Oregon about eight years ago and was trying to work with DFS there to get my son.  She didn't want me to know that P was taken away. There was nothing I could do in Oregon so I moved back here in late July because I wasn't sure if Cassidy was going to be able to get him back. She found out I was working with DFS and her grandma and she wasn't too happy."

Paul says he met with the Dallas County Sheriff Scott Rice early on in the investigation into Cassidy's disappearance.  "It kinda looks a little weird that I show up and she goes missing and all this other stuff," he said.

He freely admits that he's had a checkered past. "I'm not some crazy criminal running around or nothing.  I just done a couple of bad things that I had to pay for."

Paul says Terry contacted him in August and said she had not heard from Cassidy in some time.  "She said she thought she should file a missing person's report because she was missing visits and she wasn't even calling P, which wasn't like her.  I told her to go for it."

Cassidy was last seen at a DFS meeting about six weeks before Terry filed the missing person's report on August 25th.  "Reporting party says the last time she saw her was during a DFS visit and Cassidy left with a male by the name of "Jim" -unknown last name- he drives a silver GMC truck and has a cabin somewhere on Moon Valley." 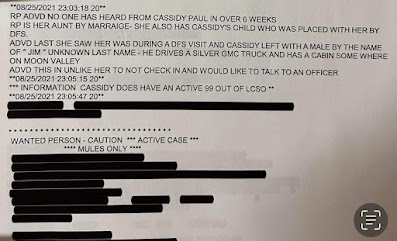 Zach Paul says he was confused about what he was told by Cora Terry about Cassidy being deceased and what he was seeing in news reports about her still being missing.  "I called up there (Dallas County) and the sheriff was the one who told me she was deceased," he said.

Paul says he has no idea when Cassidy's remains will be released to the family.  "I'm trying to find that out," he said.  Terry said she "was not speaking with reporters at this time," when reached for comment.

James "Jim" Phelps and Timothy Norton have been charged with kidnapping and terrorizing Cassidy.  Authorities allegedly found several images of a partially clothed Cassidy being held in a cage on Jim Phelps' phone.

The cabin at 386 Moon Valley Road where Cassidy was allegedly kept inside a cage burned to the ground last month while both men were in custody. Investigators found incendiary devices attached to mortar tubes and tripwires in the fire investigation, which has been ruled arson.

At this point, no murder charges have been filed against either man or anyone else in Cassidy's disappearance. They are both due in court for preliminary hearings later this month in Dallas County.

"The one thing I'm trying to do is protect my son," Paul said.  "I just don't want people lying and saying bad things about her and then my son growing up and seeing those bad things. I had to sit down and tell P and everything.  I'm just here to get my son...I just want him back."

Messages left for Sheriff Scott Rice for comment have not been returned.