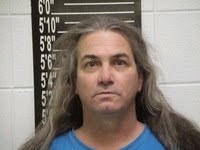 A man from Blue Eye man has been sentenced to six years in prison after he pleaded guilty to a charge that was filed against him last month.
David Erik Chandler, 46, was charged with two counts of endangering the welfare of a child after he stepped on the necks of two children while he was intoxicated on April 30th.  He also used a racial slur during the assault, according to court records.
Pursuant to a plea agreement, one count of endangering the welfare and a misdemeanor assault charge were dismissed.
"While being transported to the Stone  Mr. Chandler made the statement to me "that little (racial slur) is a trouble maker," Boone writes in the probable cause statement.


When Chandler was booked into jail, his blood alcohol level was .219....nearly three times the legal limit.
Part of the sentence includes a five year sentence for in connection to a 2008 drunk driving crash that resulted in injuries
Posted by Kathee Baird at 7:46 PM