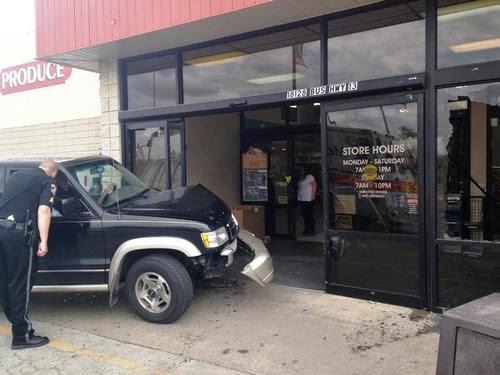 One woman sustained minor injuries after a car slammed into the entrance of County Mart in Branson West last week.

Eric Nielsen, the public information officer for the Southern Stone County Fire Protection District, says a woman walking into the store was knocked down from the impact of the vehicle hitting the store, but she refused medical treatment.

Nielsen says the elderly driver was backing out of a handicapped parking space in front of the store on Thursday (04-24-14) but somehow lost control of the vehicle and smashed through the entrance to the store.

"Everybody's pretty lucky because it did quite a bit of damage to the vehicle," said Nielsen.

Nielsen says the building was not structurally damaged in the accident and the damage to the store was mainly to the sliding glass doors and foyer of the store.