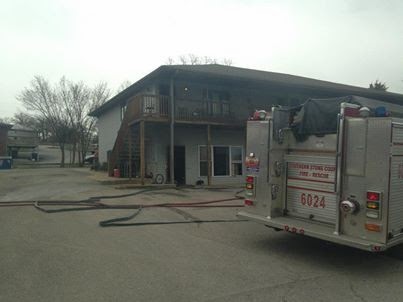 Southern Stone County firefighters were called to the Fisher Creek apartments in Kimberling City the afternoon of March 28th.

Nielsen says that Anderson could hear a woman yelling for a dog in the unit that was on fire but he couldn't see her due to heavy black smoke.  Anderson entered the building, located the woman and whisked her to safety.

The dog was uninjured and the woman was treated on the scene for smoke inhalation, according to Nielsen.
.
Crews were on the scene of the smoldering grease fire for about an hour and a half.