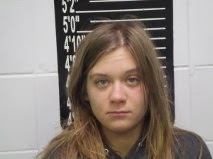 A woman from Blue Eye was charged with domestic assault after she allegedly "went nuts" and assaulted her husband last month.
According to the probable cause statement, when Deputy Jeremy Girens entered Ashley Victoria Ohlman's home on Youngblood Drive he "observed  clothing, paper, broken glass and other objects scattered across the floor in nearly every room" of the home.

Girens says Ohlman, 26, appeared to be intoxicated and "admitted to me she was drunk."
Ohlman told Girens that she and her husband had gotten into a verbal argument and he allegedly "struck her in the back of the head and mouth with his fists....but did not leave any marks."
"Ashley stated to me that she has gone nuts and began destroying the house," Giren writes in court papers.
The victim told police his wife punched him in the face and thew knives, a chocolate pie and pie plate at him.
The officer reportedly found a butcher knife behind where the victim had been sitting. When asked about the knife, Ohlman allegedly said....."I told you I threw everything."

Court documents say Ohlman said she didn’t intend to hit the victim.
A witness, who also lives in the residence, reportedly told the officer he witnessed Ohlman throw the knives hit the victim with a plate.
Ohlman, who was released from the Stone County jail after posting $7,500 bond, is due back in court in April.
Posted by Kathee Baird at 7:00 PM