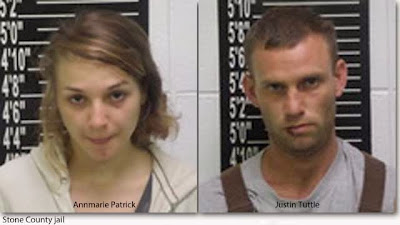 Two people who are charged with the September murder of Dan Martin have asked that their trials be moved to another county.

Lawyers for Justin Tuttle have also asked for a change of judge as well.

Tuttle and AnnMarie Patrick are also facing armed criminal action charges, tampering with physical evidence, tampering with a motor vehicle and abandonment of a corpse charges.


It appears from evidence presented at Patrick's preliminary hearing that an alleged love triangle and a drug deal are what led to Martin's murder.

Both defendants are scheduled to appear in court in early January.
Posted by Kathee Baird at 12:21 PM

my email address is meyer_news@hotmail.com