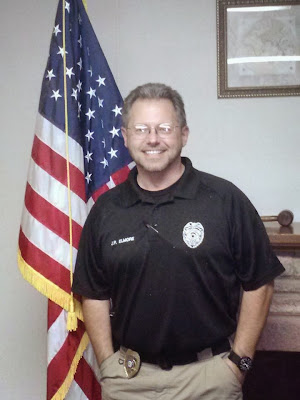 Police officers in Stone County will crackdown on impaired drivers from mid-December through New Year's Day as part of the annual "Drive Sober or Get Pulled Over" campaign.

Crane police chief John Elmore says his officers will be aggressively looking for impaired drivers during the crackdown and will arrest anyone caught driving drunk or under the influence.

"Every year about one third of all motor vehicle traffic deaths involve one or more impaired drivers or motorcycle operators," said Elmore.  "In 2012, 230 people died in Missouri crashes involving impaired drivers.  That works out to approximately one impaired driving fatality every day 1 1/2 days."

Elmore cautions drivers to be more aware of their surroundings around the winter holidays because of the increased number of holiday parties and people leaving them after they have been drinking.
Posted by Kathee Baird at 6:56 PM

John Elmore wouldn't know how to arrest a drunk if the drunk put his own cuffs on and got in the car !!!

MoDot wasted Grant money by giving it to Crane..... What a shame