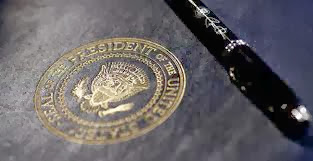 A man from Crane was one of 13 people pardoned last week by President Barack Obama as part of the bipartisan Fair Sentencing Act.

Ronald Eugene Greenwood, the former manager at a John Morrell wastewater treatment plant in Sioux Falls, South Dakota, was pardoned for his part in a conspiracy to violate the Clean Water Act at a South Dakota slaughterhouse in 1990's.

Greenwood, pleaded guilty in January 1995 to dumping slaughterhouse waste into the Big Sioux River.   Several other top level executives at Morrell were also indicted in the scheme.  It also led to a mutli million dollar settlement between the meat processor and the federal government.
As part of the plea agreement, Greenwood was placed on three years’ probation, six months of home confinement and ordered to perform 100 hours community service.  He also paid $5,000 restitution and a $1,000 fine.

“Three years ago, I signed the bipartisan Fair Sentencing Act, which dramatically narrowed the disparity between penalties for crack and powder cocaine offenses,” says Obama in a news statement. “This law began to right a decades-old injustice, but for thousands of inmates, it came too late. If they had been sentenced under the current law, many of them would have already served their time and paid their debt to society. Instead, because of a disparity in the law that is now recognized as unjust, they remain in prison, separated from their families and their communities, at a cost of millions of taxpayer dollars each year.”

President Obama granted clemency to 21 people on December 19th.  Eight of those were commutations.
Posted by Kathee Baird at 10:32 PM