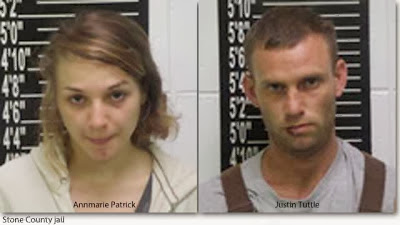 Three people are now facing charges in connection to the homicide of a Lampe man who was found floating in Table Rock Lake late last month.

The probable cause statements that were sealed last week against Annmarie Patrick and Justin Tuttle, who are each charged with first-degree murder, were made public on Monday (10-07-13.)

According to court documents, Patrick said she, Tuttle and the victim, Daniel J. Martin Jr., drove to Table Rock Lake with Martin on September 26th.  After arriving at the lake, Tuttle allegedly told Patrick, who was Martin's girlfriend, that "something was going to happen and not to freak out."

"Martin was then killed and she [Patrick] helped Tuttle weigh down the body in the lake and they left the area."  The cause of Martin's death or a possible motive for his murder were not mentioned in the newly unsealed documents.

A typographical error in one part of the probable cause statements against Patrick and Tuttle list the date Martin was killed as September 22nd, but Stone County prosecutor Matt Selby says witnesses saw Tuttle on the 26th.


A family who were on an outing at the end of Jones Trading Post Road just south of Lampe discovered Martin's body floating in the lake on September 29th.  He had been reported missing by family members the previous day.

Daniel J. Compton was charged with tampering with physical evidence in the case after investigators linked him to Martin's missing truck.

Court documents say Patrick and Tuttle picked him up in Martin's truck near Dogwood Canyon and they drove the vehicle to a residence at 305 Blue Spruce Lane in Blue Eye.

"From that residence, witnesses stated on September 28, 2013, Daniel Compton took the truck to Arkansas to be disposed of."  Compton allegedly told investigators he only moved the truck about a mile from the Blue Spruce residence to an area off of Trace Hollow Road, however, the vehicle was found at the bottom of a steep ravine near Omaha, Arkansas, after a neighbor notified authorities about the abandoned vehicle.

Patrick and Tuttle remain jailed in the Stone County jail on $1,000,000 bond each.

Kathy these fools should have been reading your blog. They might have realized how surly they would be found out and FOREVER regretting their actions.

My condolences to families involved.

This is painful to read as I grew up knowing Dan. My sympathy is with his family and close friends. This breaks my heart.

Oh I miss my son horribly!!! He was a hard worker a great father.I have his son right now.and the look in his eyes and the sadness on his face.when he looks at me with tears in his eyes and says mimi, I miss my daddy really bad I love him and I want him to not be in heaven anymore..that just breaks my heart.I want those animals to get the death penalty..an eye for an eye.I feel like im dying in side I miss my baby so bad he was a good man ..all that crap about wanting drugs and crap is bull shit my sons blood test was clean.he wanted to be the best father and he was.they were just jealous of my son