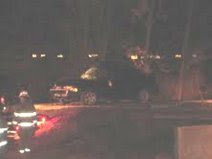 A woman was killed in Marionville when a train hit the car she was a passenger in Tuesday (12-17) evening.

The crash happened at the Odell Crossing, just west of Frisco about 5:17 p.m.  Marionville police chief Mark Webb says Katie Rafters Wiggins, who was 26, was killed instantly when the train slammed into the passenger side of the compact car.

Webb says the train pushed the car, which displayed Arizona plates, about a half mile down the tracks before it was able to stop. The driver, David R. Birch, 38, was on the train tracks when first responders arrived and was rushed to Mercy hospital in Springfield with serious injuries.  Shortly before a press briefing Webb said he learned that the driver had "been staying" in Marionville recently. 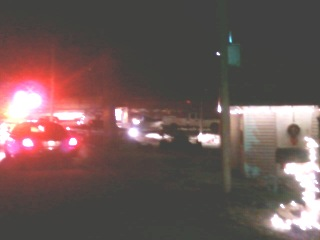 There is no cross arm at the railroad crossing, which sits very close to a house that is festively decorated for the holidays, but the flashing lights and audible signal were operational.  Webb says the view at the railroad crossing is partially obstructed due to the of the grade of the road and there have been other train/car crashes at the same spot, but none have been of this "magnitude."

Chief Webb say investigators walked the tracks looking for any evidence of alcohol containers or drugs and a blood sample will be taken from the man to determine if he was impaired at the time of the crash.

The Highway Patrol is reconstructing the crash scene to help investigators determine exactly what happened.

Authorities have submitted their case to Lawrence County prosecutor Don Trotter for the possible filing of charges against Birch, according to Aurora/Marionville assistant police chief Mark Webb.


Authorities are looking for a man they say is responsible for the death of his girlfriend who died in a train/crash in Marionville last December.

According to court documents, David Ray Birch, 38, was allegedly drunk when he tried to beat the train at the O'Dell crossing on December 17, 2012. Twenty six year-old Katie Rafters-Wiggins was killed when a BNSF train slammed into the passenger side of the vehicle.


Birch, who had over twice the legal of alcohol in his blood at the time of the crash, told medical personnel that he had been drinking prior to the fatal crash, but he was "unsure of the amount before the accident."

Rafters-Wiggins and Birch had recently re-located to the area from Arizona at the time of the crash, according to Detective Krissa Smith.

If you can help authorities locate Birch, who has an active warrant out for his arrest, you're asked to call the Aurora/Marionville police department at 417-678-5025.
Posted by Kathee Baird at 10:00 PM

Hi kathee. I am the sister of the woman who was killed in the train accident. I would like to speak with you. We are at a loss and not in Missouri. So we have very few answers

There are rumors that this may be more than just an "accident". Will you or can you dig deeper into this.

I Second that motion.. .
And for the record ; They both loved one another. ( PAUSE )