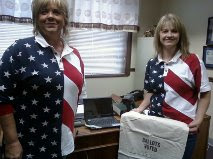 Voters will notice some changes when they cast their ballots on November 6th.

Thanks to some grant money and a deal that just could not be passed up from Jasper County, a majority of voters will be checked in with electronic poll books.

The county now owns 22 of the books, which are similar to a laptop computer.  Poll workers will now be able to scan the bar code on new voter registration cards or a persons license and that will speed up the voting process, according to Stone County Clerk Judy Berkstresser.

The company that manufactures the electronic poll books offered to upgrade the books the county owned to I Pads and buy back the ten electronic books the county had at $150.00 each.  Berkstresser declined the offer and as luck would have it, one of her employees, Donna McConkey, was at a conference when the County Clerk for Jasper County indicated that she wanted to sell her electronic poll books because she was upgrading to the I Pad system.

Berkstresser then got in contact with Jasper County officials and offered them $150.00 for the books and a deal was made.

The books normally cost $1,5000 each.  "If we wanted the latest very best thing, I'd have to be trading up every year.  This is not old technology, and we're very glad to have it," said Berkstresser.

It wasn't that long ago that ballots had to be sewn into a canvass bag (pictured above) to be taken to the courthouse to be counted.

When Berkstresser took over as county clerk in 2003 she was the first clerk in the state to implement the Opti Scan system that is now the norm throughout the country.  "That changed voting in Stone County forever," said Berkstresser.
Posted by Kathee Baird at 3:58 PM