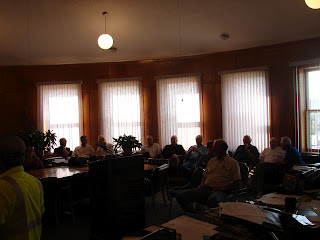 The latest meeting of the Stone County Highway Commission garnered a huge crowd.

Several people voiced opposition to proposed annexation that would allow Kimberling City to obtain a portion of Business 13 that MoDOT is going to turn over to the county at the end of the year if the terms of the contract are fulfilled by MoDOT.

Travis Tucker, the Director of Public Works for Kimberling City said Branson West is willing to enter into an intergovernmental agreement to provide the area of old Business 13 near Stone Ridge Center Road with water and sewer service.

Several people expressed concerns that Kimberling City would not be able to keep up with road repairs on the heavily traveled road.  Under the terms of the contract, MoDOT will black top the road with a 2" cap before turning it over to the county. "The county is not taking on the maintenance of any new road projects due to the budget... a special concession was made made with MoDOT," said Presiding Commissioner Dennis Wood.

Southern Road Commissioner Stan Potter said that with the contract requirement of the 2" cap, the road should not need any major repairs for about five years.

Steve Pocius, the owner of All Season Heating and Cooling said, "I don't think we should be abandoned by the county."

Wood said the proposed swap of the road would be a cost savings to the county and the public would have additional opportunities to express concerns about the matter at future meetings of the Highway Commission.

Another issue that brought out over 50 people to the meeting was that of the completion of Flat Creek Road.

Most of the road is complete, however, about eight tenths of a mile of the road near Highway 173 remains unfinished.

Several property owners told Commissioners that they had been assured that the road would be completed when they gave the county the right of way to their property.

Richard Christensen told Commissioners that Road and Bridge employee Dennis Carr told him, "he had permission to complete the road" before he gave the county permission to remove twenty trees and relinquished the right of way of his property to the county.  "I feel like I've been cheated," said Christensen.

Peggy King told Commissioners that she was also told that the county had acquired all of the needed right of way to complete the project.

The lone holdouts for the completion of the project are Ruth Smith and another unnamed property owner.  It appears the issue for Smith is the re-building of a fence line and "woven wire" that would need to be replaced if Smith were to relinquish the right of way of her property to the county.

The county quit rebuilding fences several years ago, but it does provide the materials to do so.  It is now the responsibility of the property owner to see that it is completed.

Carr said that he last spoke with Smith, who attended the meeting but declined to speak, in 2006.  When this reporter asked him why there had not been any communication with Smith since then, Carr replied, "She said she would die one day and then I could do what I wanted.  She's not gonna change her mind."


Bob Sullivan asked that the road be completed so that it is safer.

Presiding Commissioner Dennis Wood said the county has never used eminent domain to acquire property and asked that a representative from those concerned meet with Smith and Carr to see if a compromise could be reached.

Commissioners then moved on to the hot button issue of county maintained roads with one residence on them.  Some commissioners and property owners of the above mentioned roads have taken issue with the contention that The Chronicle has labeled these roads "private driveways."

Claudine Carney lives on Gravel Stone Road, one of the above mentioned roads that is 0.98 miles long (The Chronicle originally stated that this road was .98 miles long.)  She told Commissioners that her road originally had three houses on it, but now only has one and feels like the county should continue to maintain it.

Another property owner, J. D. Asher, who "owns several of the roads" mentioned in the September 6th investigative report of the roads in The Chronicle approached this reporter to express his displeasure with the story.  He claims to have "a deed to prove it," but left before this issue was taken up by Commissioners.

Road Commissioners told the audience that since the September 6th report several other roads with one residence on them have been found in the county.  One of the roads the county maintains has a communication tower on it and not a residence.

"We're looking at that road and other roads closely," said Southern Road Commissioner Stan Potter.  Potter asked this reporter what they thought the county should do in this situation.  "Since the company owning the tower is obviously making money from entities utilizing their services they should have to pay to maintain the road," was the reply.

Since 1972 when the "Special Road Districts" were dissolved and replaced with the Stone County Highway Commission after the county adopted the Alternative Form Highway Commission over $750,000 has been spent to maintain these roads.

The roads in question that have been maintained by the special road districts were "grandfathered" into the new county maintained system but have no sunset, according to the County Commission's attorney, Bill McCullah.  Commissioners have been asked twice for further documentation that precedes the 1995 estimates that were provided to The Chronicle.

Presiding Commissioner Wood stated that he did not know of any further documentation, but added that he would ask the County Clerks office to provide any if available.  He also said that The Chronicle would have to incur the cost of research to find the records, which is allowed under the Sunshine Law.

Some citizens attending the meeting asked that Commissioner provide "minimal maintenance" to the above mentioned roads with one residence on them.  Southern Commissioner Jerry Dodd and Southern Road Commissioner Potter said the issue needs to be examined before a final determination can be made.

We will continue to follow this story and have updates in future editions of The Crane Chronicle.
Posted by Kathee Baird at 6:30 PM

u need to ck how that road to 173 was paid for. in exchange for some fill dirt the owner on the south got big wide private driveway to front door. the one on n. got got driveway over onto his private property 'just in case he ever puts in trailer court. we taxpayers paid for equip use, fuel,wages and gravel hauled from railey creek. i brought this b4 the county comm about a yr ago. i wanted to see the numbers that showed this was cheaper than hauling fill from the n.county barn. there was never any cost compared. once the 2 drivways were finished work stopped. i have pics as it looked back then j foster

I would like to see the pictures and get some additional information from you.