There has been some movement in the court case in which Crane Alderwoman Jessica White is charged with assault of a law enforcement officer.
White, who recently had surgery to repair damage to her knee during the scuffle, is scheduled to reappear in court on September 18th.  Since the case against White is a misdemeanor, there will be no preliminary hearing.
Stone County prosecutor Matt Selby recused himself from the case in June.  The Attorney Generals office will now appoint a special prosecutor to handle the case.
White, and four of her family members, were arrested on May 5th following a traffic stop of her cousin, Brittany Barnett, who was pulled over on the White's property. Barnett's husband, Thomas, was arrested on an outstanding warrant out of Crane before the incident with the White's, who are claiming police brutality, in the cases against them. 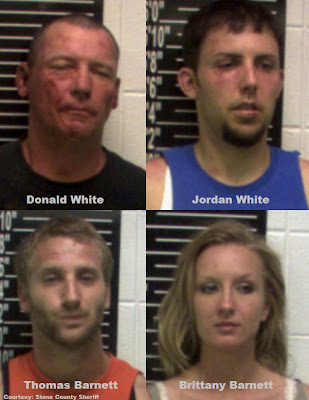 Stuart Huffman, of the Whiteaker and Wilson law firm in Springfield, who now represents White says he is waiting on paperwork related to the case from attorney Dale Wiley, who has left the case, and wanted to review all the documents related to the case before commenting.

Whiteaker and Wilson is the same law firm representing Robin Miller in a federal civil lawsuit filed against deputy Brandon Flack, who is one of the officers accused of using excessive force in the arrest of the White's.

In the federal filing by attorney Brandon Potter, Flack is accused of violating Miller's fourth and fourteenth amendment rights and using excessive force while arresting Miller on a DWI charge on January 30, 2012, in Galena.

Attorney Richard Crites, who is also a reserve deputy for the Stone County Sheriff's Office, filed a defamation lawsuit against White, Wiley and others saying his clients, Deputies Taylor Jenkins and Brandon Flack, were only doing their job when they were assaulted by Jessica White.

White's husband, Jordan, and her father-in-law Donny "Stick" White are facing charges of interfering with an arrest.
Posted by Kathee Baird at 5:20 PM

How does a city leader keep their position after being formally charged with assault of any kind ? Resign already .

You guys are funny. You obviously do not know Jessica White. All of you guys hide behind this website and make these comments as Anonymous, if you truly feel this way, why dont you go to a council meeting, i believe they are held every other monday, call Jessica, I mean she works right in the middle of town, tell her/council your concerns, how you really feel. Until then, stop being such cowards!

Well the people have spoken, Richard Hill is OUT and Doug Rader is IN. ENOUGH SAID!!!!!!!