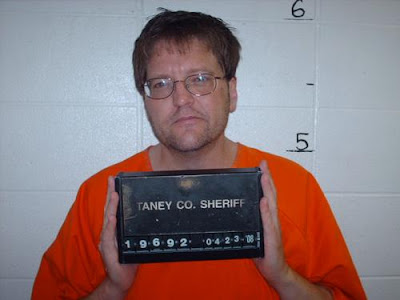 -
A Utah man who pleaded guilty last month to federal kidnapping has pleaded guilty to hauling the woman's dead body to Branson.
Michael Doyel, 51, pleaded guilty to murdering 50 year-old Deborah Jones today (01-06-12) and was sentenced to 15 years in a Utah prison. Doyel will first have to serve his 30 year federal sentence before the state sentence.

Doyel strangled Jones after she ended their relationship. Investigators found her body hidden in a plastic storage container in the backseat of her car outside of the 76 Inn.

Doyel, who at one time was declared incompetent to stand trial, kidnapped another woman, Patricia Murray, of West Valley City, Utah, and brought her with him to Branson.  During on proceeding in federal court in Salt Lake City, Doyel continuously looked around the room and told the judge that Jones was still alive and would be there any minute.
Posted by Kathee Baird at 6:45 PM

My name is Carrolyn and I am currently a student with Rasmussen College (based in MN), I am going to school for my Bachelors in Criminal Justice. We were given an assignment to interview a crime reporter or blogger and I would like to interview you if possible. We could it via email and I could send you a list of questions. Please let me know if you would be interested.

Sure. However, I will be out of town until late Wed.