Another Delay In Capital Murder Trial Of Man Accused Of Killing Stepfather:

9:54 AM
Kathee Baird
1
-
-
There has been another delay in the trial of a Tennessee man charged with capital murder for the 2006 stabbing death of his stepfather, Dr. David Millstein.

Baxter County Arkansas Prosecutor Ron Kincaide says defense attorneys for Gary Wayne Parks, 40, of Germantown, Tennessee have asked for a second continuance in their client's trial, which was scheduled to begin next Monday (01-23-12,) citing "a surprise" in the medical examiner's report.
-
According to docket entries in the case, defense attorney's Joe Perry and Danny Glover, wanted the State Medical Examiner to pinpoint the time of Millstein's death. In December of 2010 Dr. Charles P. Kokes told defense attorney's that he could not pinpoint the time of Dr. Millstein's death and he does not routinely note the time of death while performing autopsy's.
-
On January 13, 2012, Kokes faxed Parks' attorney's a letter noting that he believed the time of death was in the early morning hours of June 17, 2006.  In their motion to continue, defense attorney's cited that the new information did not give them enough time properly defend Parks, and their need to have an expert review Dr. Kokes "opinion."

In the correspondence to defense attorney's Kokes says, "Autopsy findings alone, without consideration of investigative information, would place his death anywhere from 3 p.m. on 6/16 to 3 p.m. on 6/17.  Assuming the reliability of the investigative information I have been provided with, the time window narrows, and it is unlikely that death would have taken place prior to 1:30 a.m. on 6/17.  In light of the fact that he still had remnants of a dinner type meal in his stomach, that the assault took place while he was in bed, and that he was still wearing his bed clothes, it is most likely that the death took place in the morning hours of 6/17 between 1: 30 a.m. and the time at which he would have normally arisen." 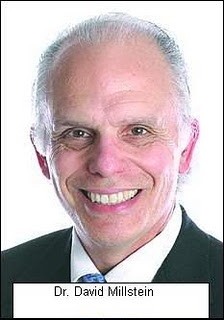 The probable cause affidavit that outlines the state's case has been sealed since Parks' arrest in December of 2009, but Kincaide says Parks killed 62 year-old Millstein, a Mountain Home urologist, in his home at 1707 Stephen Court on June 17, 2006, for financial gain and that the murder was premeditated.

Millstein was married to Lois Jane Parks (Gary's mother) at the time of his murder, however the couple were estranged and she lived in Little Rock at the time his death.
-
Authorities in Mountain Home and Arkansas State Police investigated the case for three and a half years before Parks was arrested and say other arrests connected to Millstein's murder are possible.  In June of 2008, Mountain Home police chief Cary Manuel said authorities were interested in two suspects for Millstein's murder and that both were related to him.

If convicted of capital murder, there are only two sentences available for Parks...life without parole or the death penalty.
Posted by Kathee Baird at 9:54 AM

Looks like toast. I think he should start talking...If he's not already.