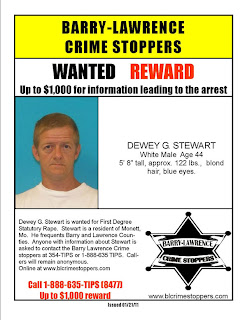 Authorities in Monett are searching for a man accused of raping the child of his girlfriend.

Dewey Gene Stewart, 44, of Monett, was charged with first-degree statutory rape last week and is on the run from cops according to Monett police chief Tim Schweder.  The charges were filed after someone made a hotline call to the Missouri Child Abuse Hotline to report a child under 12 was being treated at Cox Monett hospital.

Stewart is on parole for several drug and traffic offenses according to Schweder.

Stewart was arrested at a mobile home near Monett this morning.  Barry County Sheriff's deputies assisted officers from Monett in the arrest.

Stewart is being held in the Monett jail on $75,000 cash only bond pending transfer to the Barry County jail.
Posted by Kathee Baird at 8:26 PM

The man who raped the child must be punished and put into a jail. He must pay for what he has done. Justice will always prevail!