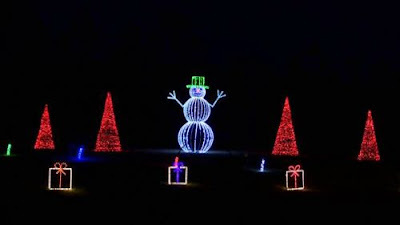 Authorities in Taney County are investigating the theft of a Christmas lighting display from the Branson Area Festival of Lights.

Chamber of Commerce officials say a new display called "Snowman Follies" which consists of a Snowman and  six Christmas gift boxes, were stolen from the drive-through holiday light display sometime between 11:30 p.m. Thursday and 10:30 a.m. Friday.

Director of Tourism Development for the Branson Lakes Area Chamber of Commerce Kathleen Bullock says electrical wiring was ripped from the displays. A crew worked Friday to repair the damage, and the display has reopened.  The value of the display is estimated at $1,500.

The holiday light display, which remains open through January 2nd, is located off Shepherd of the Hills Expressway with the entrance near the Sight & Sound Theater.

Anyone with information about the reported theft is asked to contact the Taney County Sheriff's Office at 417-546-7250.
Posted by Kathee Baird at 9:50 AM