A woman from Mountain Grove will stand trial on first-degree murder charges for the death of a man who had to be identified through dental records.

Candace Richardson is also facing arson, robbery and armed criminal action charges connected to the September 7th death of Charlie Peterson near Spring Creek in Ozark County.
-
According to court documents, Richardson, 34, and her former husband, Marty Overby, 31, who are both from Mountain Grove, conspired for about three weeks to steal $30,000 and a large quantity of methamphetamine from Peterson.
-
A witness told investigators, "Charlie and Candace had been fighting" and Charlie was cooking his last batch of meth for her "because Candace had been cutting the bag and shorting his customers."
-
- 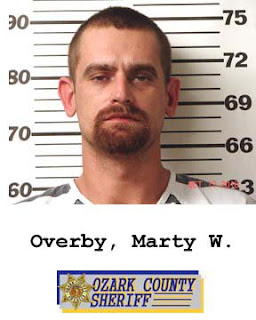 Federal Marshals are looking for Overby, who is facing similar charges and is still on the run from the law. If you know where he might be you're asked to call the Ozark County Sheriff's Office at 417-679-4633 or 9-1-1.
Richardson is scheduled to be formally arraigned in circuit court on November 3rd.
-
UPDATE 10-16-10:

Overby was apprehended by authorities in Texas County this afternoon.  He is being held in the Ozark
County jail $100,000 cash only bond.
Posted by Kathee Baird at 3:18 PM

Kathee, Marty Overby was not apprehended. Marty Overby contacted Texas County Law enforcement and turned himself in. Please update the facts. I do love reading your blog. Thank You.