~UPDATED-DEVELOPING~Man Transported To Hospital After Shooting At Baptist Bible College: 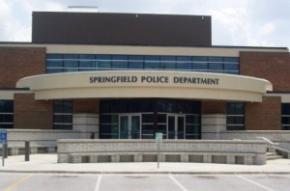 A woman is in police custody after she was tasered near the former Doling Elementary school following a shooting that apparently began in a parking lot behind dormitory's at Baptist Bible College in the 2200 block of North Summit.
Lt. Roger Moore says witnesses say the woman forced the man in her vehicle after firing shots into his vehicle.  One of those bullets shattered a window in the mans truck, according to Moore.  According to witnesses, the man was shot in the back as he attempted to bolt from the woman's car in the 1400 block of N. Atlantic after cops found the vehicle near the former elementary school.

Moore says that the pair, who he believes to be in their 20's, had recently been divorced.

The man was transported to a local hospital for treatment of serious, but non-life threatening wounds.  The woman was taken to police headquarters for questioning.