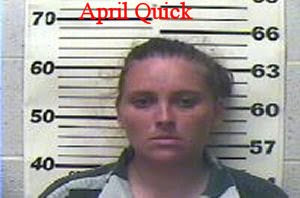 Details are sketchy at this point, but authorities in Douglas County are investigating a murder (09-10-10) near a roadside park on Highway 5 between Ava and Mansfield.

The newly appointed coroner of Douglas County, Rick Miller, says the body has been sent to the Greene County Medical Examiners Office for autopsy. However, Dr. Doug Anderson with the GCME and Dr. Keith Norton with Southwest Missouri Forensics are both out of town, so it appears that the body may have to be sent to Columbia for autopsy.

The Missouri State Highway Patrol Division of Drug and Crime Control is assisting Douglas County Sheriff's deputies in the investigation.

The name of the victim has not been released pending the notification of the next of kin.
-
UPDATE 09-15-10:
-
Douglas County Sheriff Chris Degase says a custody dispute is what allegedly led to the murder of a man from Wright County.

April D. Quick, 32, and Aimee L. Herring, 29, both of Mountain Home, AR, have been charged with first-degree murder, robbery and armed criminal action in connection to the shooting and stabbing death of forty two year-old Phillip Taylor.
- 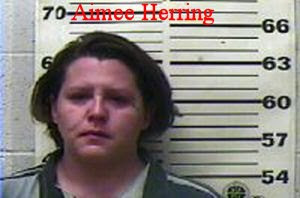 -
Court documents reveal that Taylor is the father of three of Quick's children and had not seen them in about eight years. It is alleged that Quick agreed to meet Taylor at the roadside park to discuss a visitation schedule and he was ambushed. The robbery charge stem from the women allegedly taking Taylor's cell phone after he was murdered.

Only one of the women will be extradited back to Missouri as there is no way to keep the women segregated in the Douglas County jail.

IT WAS ONLY 5 YEARS FROM THE TIME PHILLIP TAYLOR SEEN HIS KIDS!!!

im a family member of april and am in complete and total shock,of what has happened anyone has any correct info. on their past together. im very interested in hearing what happened.

peggy all my condolences,thank u for the info,this is aprils family member again, no one deserves that, it just hard for all of us,we are all looking for answers. and i honestly know nothing of their relationship. i just dont see what would drive someone to do that to someone. again any info is greatly appreciated, and again to all phillips family i am truly saddened and hurt by what has happened. and god bless

I MISS U UNCLE PHILLIP. I WISH YOU DIDNT HAVE TO DIE OVER WANTING TO SEE YOUR KIDS. I REALLY LOVED YOU. YOU WERE THE BEST UNCLE EVER. NOW YOUR KIDS WILL NEVER GET TO SEE HOW PRECIOUS AND A GOOD HEARTED MAN U REALLY ARE. I WILL ALWAYS LOVE YOU UNCLE PHILLIP. I LOVE YOU.

I am so sorry for your loss. Do any of you have a picture of Phillip you can share with me?

My email address is :

I am also in shock. I met April a few yrs back. She told me if Phillip ever tried to see the girls she would kill him. I didn't think she was serious. I lost contact with her. But when I heard she had killed someone I knew exactly who it was before I ever looked it up on the internet. So where are she and Amy being kept at since they didn't want them together? Any word on when they will go on trial?

Just to set the record it was 8 years since he had seen the children and if watching the news, April did not do the deed, Amiee confessed to the actual deed.
Until you have walked in someones shoes you have no right to make judgements. I think the court system will do that by looking at the facts not hearsay.

It doesnt matter when and how long it has/had been sence Phil did see his children. April would not let him see them. April was/is a crazy little person. I know this I have known April sence her and Phil first started seeing each other back in 1996. April did go to court yesterday morning she did pleade guilty to 1st degree murder and Arm crimianal actions. She is facing 22 yrs. Let me be the first to say this, She shoud have gotten the death sentence. Phil was a loving and caring man, and for April and Amy to take his life just because he wanted to see his kids was just plan wrong. Phil will NEVER get that chance to see any of his children again. Not many relize Phil had another daughter and a step daughter from another marriage these 2 girls are hurting and they will never be able to see their father aswell. On the other hand in 18 years April will be able to hold her children once again.

I know this has been nearly 4 years but I'm hoping you might be able to tell me if you remember any details about this statement.

"The newly appointed coroner of Douglas County, Rick Miller, says the body has been sent to the Greene County Medical Examiners Office for autopsy. However, Dr. Doug Anderson with the GCME and Dr. Keith Norton with Southwest Missouri Forensics are both out of town, "

Do you know why they were both out of town at the same time? Do you know when they returned? I am working on a different case that has nothing to do with this case. I would greatly appreciate any help you might be able to give me.

i am a close relative of Aprils. I could tell you stories of things that Phil put her thru while living in Florida that would make you cringe. He has done prison time for drugs. he was not a good man. He was a beast..an animal on drugs that would do anything to get those drugs. including pimping her out and taking every last dollar for drugs rather than food/milk for the babies. she had every reason in the world to want him dead during those times. But those days were over and she no longer feared him. Did any of you know that when they tried to make it work (one of the many times) she was by his side when he tried and failed at drug rehab? didn think so. She done all she could to try to get him on the right track to be a part of his kids lives. He made the conscious choice not to do right by them. I know she didn't do it. she was with a woman that was very jealous of the fact that he wanted back in Aprils life. If you would all open your eyes and stop focusing on April just because most of you know her name and pay attention to the fact that Amie admitted to being the one that committed the crime and April was just there you might see things differently. April had no clue what was going to take place that night. nobody deserves to die but believe me she has died also. She sees her children once a month if factors permit and in a room with many other women and their families. two hugs in 4hr span,one on arrival and the other when time is up. it really is amazing how people tend to forget the ugly about the one killed and forget about the good in the one that is left behind. malena should be more honest about who he was. she was saved several times by April when Phillip was beating her. April spent more time with malenas dtr when she was a baby than phillip did when he had her just to make sure she was safe. to many kids got hurt on both side and for that saddens us all but April was/is a good person who was in wrong place at wrong time and that can happen to anyone of us at anytime. i know its over and she has her time to serve but i feel that someone needs to lay out the good/bad on her behalf. Dont judge lest you yourself want to be judged. might not be the outcome it should be. I pray to GOD that none of you are in a situation that requires your fate to be in the hands of those that dont listen with open minds and look with only blind eyes at all evidence. "eye for eye makes the whole world blind". Ghandi

that blog about April was about the phillip taylor murder in ava.

She didnt deserver any of this for a crime she didnt commit or wish upon him. This is Phillip Brandon Taylor. If you know her so well you should know who i am and I do not appreciate you're guessing on what really happened. She was an amazing wonderful person and she may act tough at times but she honestly wouldn't take it that far. I know she didn't intend for that meet up to end like that. Any specific questions email me at Philliptaylor113@gmail.com