Testimony Underway In Murder Trial Of Man Accused Of Murdering Wife, Encasing Her Body In Concrete: 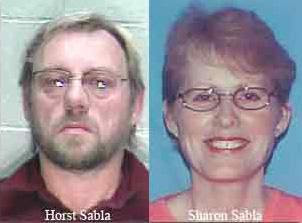 Testimony is under way in the first-degree murder trial of a Lebanon man accused of killing his wife and encasing her body in concrete.

Prosecutors allege that Horst Sabla, 55, shot his wife Sharon in the back of the head, placed her body in a plastic toolbox, covered it with lime and then poured concrete on top of her in August of 2008 because of financial strain.

Hunters found the plastic hinged toolbox on opening day of firearms deer season on November 15th, 2008, smelled a foul odor emitting from the container and called 911. Authorities had to use bolt cutters to open the box, which was wrapped in chains and locked, to open the container. What they found inside was disturbing, the body of a woman dressed in pajamas that had been encased in several hundred pounds of concrete.

Authorities asked for help from the national media to help identify "the lady in the box." Their break came about a month later when a friend of Sharon Sabla's went to the Sheriff's department to say she hadn't seen or heard from her friend in some time.

Armed with that information, investigators obtained a DNA sample from Sharon Sabla's daughter, which came back positive.

The Sabla's were under a tremendous amount of financial stress at the time of the murder, they had recently lost their home and were living in a travel trailer. Some sources close to the investigation say that the Sabla's, were both HIV positive, and that Horst Sabla was tired of caring for his wife and wanted to return to his native Germany.
Sabla, who is also facing armed criminal action charges for his wife's murder. His trial was moved to Camden County on a change of venue.
Posted by Kathee Baird at 8:39 AM