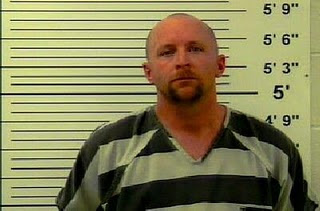 A jury in Carroll County, Arkansas has convicted a man from Green Forest of first-degree murder for the beating and stabbing death of his mother-in-law two years ago.
The capital murder trial of Marty Alvard began March 22nd. The jury got the case about 1:30 yesterday afternoon and came back with the conviction of the lesser included offense after deliberating about 6 1/2 hours.
Alvard, 40, hit his mother-in-law Janice Sue Allen, 60, over the head with a baseball bat and slit her throat after "she gave him the cold shoulder " and he "just snapped" on April 25, 2008, according to court documents. Jo Ann Alvard, Marty's estranged wife, who was recovering from brain surgery, told investigators that she was in the bathroom when she heard "a loud kthunk sound"....like someone being hit and heard her mother moan.
Jo Ann Alvard testified that Marty Alvard attempted to rape her but told her if she was going to stay alive they had to leave her apartment.
Jo Ann Alvard told jurors that she yelled out to a friend for help and her husband told her if she did that again, he would have to kill her.
Alvard had called in sick to work with an earache the morning that Allen was killed. After killing Allen, the couple then drove to Marty Alvard's place of employment in Golden, Mo., where he told his boss "he had done something bad," according to court records. Alvard's boss told them "they needed to go to a church and meet with the Pastor in Oak Grove."
On the drive to Oak Grove, Jo Ann Alvard rode with her husband's boss, Wendell Parton, who wouldn't let her use his cell phone to summon help for her mother. When they got to the church, Alvard's employer convinced him to hand over a loaded gun he was carrying because he thought Alvard might try to commit suicide.
Prosecutor Tony Rogers says that control issues led to Alvard murdering Allen. Court records say that Marty Alvard was “losing control” of his wife, who had “walked out on the defendant” after 20 years of marriage when she told him to choose her or porn.
Alvard, who was also found guilty of kidnapping with a weapon and terroristic threatening with a weapon, was sentenced to 40 years in prison on the murder conviction; 28 years for kidnapping and 16 years for terroristic threatening. The sentences will run concurrent (at the same time.) Alvard will have to serve at least 70% of his sentence, which is 28 years, before he becomes eligible for parole.
Posted by Kathee Baird at 8:32 AM