A Barry County woman is accused of conspiring to help her friend kill her husband for insurance money.

A week after Beau’s death, Kathy Mock was arrested for his murder. 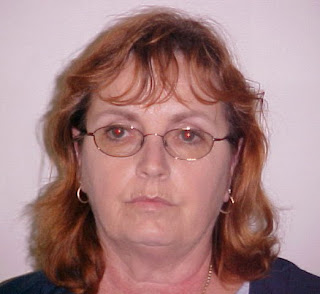 Two years after the homicide, Kay Young (a.) was charged with first-degree murder and armed criminal action. The 55 year-old widow is being held on a $2.5 million, cash only, bond.

Those charges now accompany the federal conspiracy charges that were filed today (10-23-09.).

Some of the alleged evidence leading to Mock's arrest came from an interview with her own son, Thomas Ponder, who told cops that his mother told him Kay Young wanted her husband killed and there was a $10,000 payment to anyone who would kill him.

Some evidence recovered at the crime scene included a knit ski mask, allegedly containing Mock’s DNA, and a box of latex gloves which belonged to Young.

Mock allegedly left her Barry County home on March 22, 2006, and drove to the couple’s home in Novinger. On the way, court documents allege that she stopped and purchased a ski mask from Wal-Mart in Republic that was used in the conspiracy.

A friend of Mock’s, who was unaware of Griesbauers murder, drove her to a Joplin hospital for mental help on March 24, 2006. That friend told authorities that Mock told her that, "Young had given her “several hundred (hydrocodone and acetaminophen) pills with instructions to take some of these, “to receive a short term in a mental hospital and avoid a penitentiary sentence.”

On April 6, 2006 Mock was taken into custody at a mental health facility in Joplin, where she reportedly checked herself in to “avoid prison time.”

Kay Young, is a descendant of John C. Novinger who founded the Adair County town of Novinger. It was on the founding fathers property that Melvin "Beau" Griesbauer was gunned downed after completing his late-night shift at a meat packing plant where he made about thirty-five grand a year.

Kay Young had been married three times before she wed Beau at at Fort Leonard Wood in 2004. In all three of her previous marriages she took her previous husbands last names....but not Beau's. 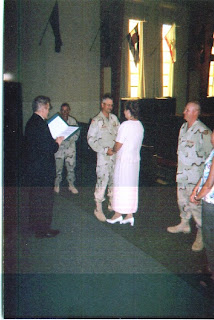 Kay and Beau getting married at FLW

Some people say that it was because she allegedly knew that Beau wouldn't be around for long.

Griesbauer, was an LPN/Army Reserve Specialist who survived a tour in the desert, and was insured to the max. His wife told friends he did so to make sure she would be taken care of if anything happened to him.

At the time of her husbands deployment, Kay was allegedly facing surgery with an uncertain outcome.

But, on March 23, 2006, two years after Beau Griesbauer and Kay Young exchanged vows at Fort Leonard Wood, and not long after he returned from Iraq, the 43 year-old was found shot in the head near a barn on his wife's property.

Lying near Beaus body was a Novinger family heirloom rifle, a 30-30 Winchester....but it was at weird angle for a suicide according to investigators and it immediately raised the neck hairs of investigators.

By all appearances Kay Young was a stellar member of her community. She was a school superintendent, a class sponsor and a beloved teacher. She fostered children and championed Christian causes.

She also made donations to local 4-H clubs in “memory of her mother” Celia Hammons who died in 2000.

When the original family homestead was given to Kay, in the months preceding Celia’s death, Kay’s siblings said that their sister turned their mother against them and restricted visitation with her.

With the town talking about Beau's suspicious death and Celia Hammon's death, some people took their suspicions to authorities who exhumed Celia's body for testing. No word on what those results revealed.....yet.

Adair County deputy sheriff, Larry Logston, has indicated that several people in the community and confidential informants came forward with information on the cases.

According to the indictment, Young and Mock planned and caused the murder of Young’s husband Melvin B. Griesbauer on March 23, 2006, so that Young could collect his insurance policies.

The indictment alleges that Young knew that her husband had a $600,000 basic life insurance policy issued by the Army And Air Force Mutual Aid Association (AAFMA) through his service in the United States Army National Guard.

Young was beneficiary of the policy upon her husband’s death. She was also the beneficiary under two other policies concerning Mr. Griesbauer. Young had enrolled him in a $37,500 accidental death and dismemberment insurance policy through Monumental Life Insurance Company in connection with her employment at the Milan Schools and her association with the Missouri State Teachers Association.

They had also enrolled in another accidental death and dismemberment insurance policy for $100,000 through Continental Casualty Company, a subsidiary of CNA.

On March 22, 2006, Mock traveled from her residence in Cassville, MO, to Griesbauer and Young’s residence in Novinger, MO.

The indictment alleges that when they returned home, Mock and Young caused the death of Griesbauer by causing him be shot in the head with a .30-30 Winchester caliber rifle, a firearm previously in the possession of Young and her family.

Both Mock and Young tried to conceal their involvement in the murder by making false statements to other persons. Additionally, as alleged in the indictment, Young provided Mock with pills containing hydrocodone and acetaminophen. She told Mock consume the pills in order to receive a short term in a mental hospital and avoid a penitentiary sentence.

Beginning in late March 2006, Young used facilities in interstate commerce, and thereafter the mail, as part of processing the insurance claims.

If convicted, the maximum penalty for each charge is life in prison and fines up to $250,000.

Reap commended the tremendous efforts of the Adair County Prosecutor’s Office in conducting its investigation.“This was a long term investigation,” said Roland Corvington, Special Agent in Charge of the FBI in St. Louis. “The cooperation from the Adair County Sheriff's Office, Barry County Sheriff's Office and the Missouri State Highway Patrol helped bring this case successfully to this point.”

The charges set forth in an indictment are merely accusations, and each defendant is presumed innocent until and unless proven guilty.
Posted by Kathee Baird at 10:19 PM

This is in regards to the mock story
I was in two county jails with kathy and
She spoke of her involvment
Very vividly,unnerving! She deserves life
Without. I will follow as much as possible.

Pigs rotting where they belong

And that's something to brag about. Ur scum as well!!!!!