Remains found on Phelps' property during search. Do they belong to Cassidy Rainwater?

The disappearance of Cassidy Rainwater is heartbreaking and very disturbing.  And if the chatter is true, it's the kind of stuff that happens in horror movies.

Cassidy was reported missing by a family member in August but reports say she was last seen on July 25th.  James David Phelps, 58, told investigators that he was helping the 33-year-old woman "get back on her feet" and that she had been living in the loft area of his cabin at 386 Moon Valley Road.  He told law enforcers he last saw Cassidy when she walked down his driveway in the middle of the night on July 25th, according to court documents.

Phelps' cabin has a Lebanon address, but it is near Windyville, a small town in southwest Missouri that is reported to be haunted and that locals call Spookyville. 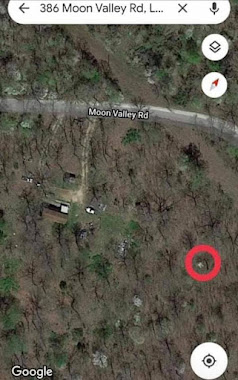 Cassidy Rainwater was very familiar with the area around Moon Valley Road as her family once owned land not far from the last place she was reportedly seen, according to a former neighbor.

This case broke wide open after the FBI received a tip from an anonymous source who had evidence of a partially clothed woman being held in a cage and tortured on the dark web.  A source close to the investigation says the FBI used software that uses pixels and matches skin tones and contacted the Dallas County Sheriff's Office on September 16th after finding a possible match to Cassidy's missing person's report.

The source, who wishes to remain anonymous, says police became suspicious of Phelps when they interviewed him on September 16th "because he was acting weird."  They walked to the back of the cabin and saw meat hooks in the bathroom through a window.  Law enforcers then asked a judge for a search warrant. 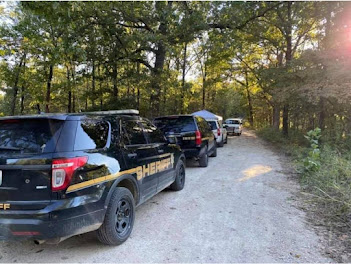 When they kicked in Phelps' door the following morning they allegedly found him eating a sandwich with human remains.  He allegedly laughed and told investigators that he had served human ribs to an unsuspecting neighbor a few days prior.

During their search, cops allegedly found vacuum-sealed body parts with detailed labels in a freezer and seven photos of Cassidy in a cage on Phelps' phone.

If this case has not already become federal it soon could be as authorities believe that Phelps' alleged accomplice, Timothy Leroy Norton, 56, who is an over-the-road truck driver, may have transported victims across state lines.

On September 19th, investigators interviewed Norton who told them that he lived in his truck at the Moon Valley property, even when he was off the road. When investigators re-interviewed him on September 20th he told them that he helped Phelps restrain Cassidy at the property and he was arrested.  Another source says cops allegedly found human remains in some trailer tanks on the property.

Another source tells me that at least one set of partial remains have been recovered so far at Phelps' property and authorities believe there could be at least 13 other sets of remains at this property...and some of them could have been missing for decades.

Investigators are also interested in property near Preston that belongs to one of Phelps' family members.

There has been speculation on the online forum Reddit that there could be a possible connection to a van recovered on Phelps' property and the nearly 30-year-old mysterious disappearances of Sherrill Levitt, Suzie Streeter, and Stacy McCall in the Springfield 3 case.

Online sleuths are also paying close attention to this case and a possible connection to, Echo Lloyd, 47, who went missing on Mother's Day 2020 from Edwards, Missouri, which is about an hour-and-a-half away from the crime scene on Moon Valley Road. 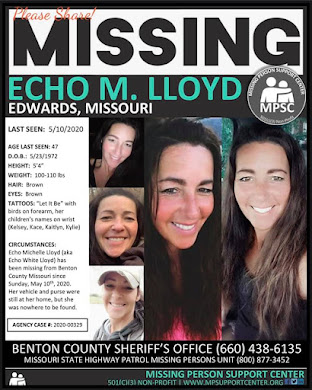 Fate can be brutal sometimes. Rainwater's mother, Tracy Wahwassuck, was reported missing by her boyfriend, Leonard "Len" Couch, in 2007.  Her remains were found not far from Couch's residence in 2008, an area that had already been searched, according to a family member who wishes to remain anonymous.

No charges have ever been filed in Wahwassuck's case but mystery surrounds it as well.  Len Couch died in February of 2021.

Some people are asking about Cassidy's son.  The family member told me he is safe.

This case is still breaking and will be updated as details become available.

I’m so glad you are posting again!!

I wonder if this could be connected to my cousin’s disappearance. She’s missing from Missouri too (2004) https://www.google.com/amp/s/www.lakenewsonline.com/article/20160115/NEWS/160119182%3ftemplate=ampart

I wonder if this has any thing to do with the Angela hammons case out of Clinton Missouri from years ago? Might reach out the Clinton police department and see if any clues could be passed on between everyone involved

Betty from Sullivan came up missing just out of the blue and has never been found prayers there for her family and this is just wreid.prayers to all and everyone

Though most of this blog is typical lebanon gossip and hearsay and not proven facts, I do hope they can close the Sprigfield missing 3's case.. those families need closure and I hope its not really as horrific as it's being said it is... Be safe folks their are some sick people in this world..

Absolutely disgusting that there are sick people like this in our world....Thanks for posting this!

Hello! This is very interesting. Without disclosing your sources, could you please provide their relation to the case and how they came to learn the information you have provided? The internet is pretty quiet on this case and I did not see anything about human remains.

Your a blogger but where did info come from and why is this not on the news?

Is this true? Why haven't the police got equipment on the property to excavate the land and search for bodies??

Is this true? Why is there not police presence there excavating the property?

With a case like this, if the cannibalism does turn out to be more than rumor and speculation, the police department, state police and FBI would be keeping as much information as possible out of the news and media. It's a simple fact of avoiding a mistrial because someone released the information to early. It's also highly possible that aside from just avoiding a mistrial they are looking into other suspects and don't want to release all the information to keep any other possible suspects from fleeing.

I was just wondering how you came across everything you are saying and if you have thought about the families of these men? I mean I know James' family personally and I don't think it's appropriate to spread things like this if they aren't facts. Nothing has been said about anything you are posting on your blog. The news isn't airing hardly anything about this case. So please help us understand how all this information you have came about.

Pretty sure they plead guilty to it beings there were 2 arrests made,my friend who introduced me to this story knows the main girl and her mother who both went missing and 1 found, just saying ...

Google it. There are reports but none so graffic.

Oh. All comments have to be approved. Nice. 🤣🤣🤣

Welcome back kathee Baird
Well....looks like some new leads to the 3 missing women....and probably many more....cassidy rainwater mom found there many years ago? How could that be coincidence?

At best, she has uncritically lifted it from a site called "iFunny". I namely googled the claims made above but only found ONE link, which went to a joke site called "iFunny".
The kidnapping case, however, seems to be real but not the other details about cannibalism and meat hooks and what have you, which appears to originate from said humor blog.

However, the article on iFunny now appears to be deleted because when you click on it, it is gone and only a smiley is shown, but it still pops up during a search for "James D. Phelps Timothy Norton meat hooks".

So, the kidnapping case appears to be real but the rest a really distasteful hoax.

I wonder if the girl missing from Hannibal Missouri around 2010 was a victim?

I'm a local born and raised in Windyville and we DON'T call it spookville . This is so awful can't understand why people do things like this There are so many rumors who knows the truth

Wonder if a tie to #angelahammond dissappearance

I was wondering the same thing until ai remembered this happened in the late 80's/early 90's and the man who grabbed her at the phone booth was described (by Angela to her boyfriend,) a a "dirty old man." Both of these men arrested are in their 50s so they would have been fairly young at the time she disappeared.

Agreed. Most sources just mention the photos and the arrest. They don’t say anything about cannibalism or other potential remains. Curious where the info is coming from?!

Exactly. Notice the heavy usage of the word allegedly...

maybe they need to look for Gina Dawn Brooks there too, shes been missing since 1989 in fredricktown Mo.

I just seen i my comment had to be approved before being posted. Im sure since I said it was fake info because only kidnap charges and not murder of corse im sure it won't get posted now

Yes but there is evidence of kidnapping but not murder at this time. The charges will come as the case and evidence unfold. If there is proof.

I also know the families.. no one has plead guilty and no bodies have been identified or told to be rainwater... Just saying....

DNA the remains science is so advanced they can pull it and do. And run in database. Because doesnt family members searching for lost ones offer dna for in case situations?

There are 2 men missing from west plains missouri.. Ira Briscoe and his roommate..

What exactly are you just saying? Who is they? No one has plead guilty to anything in this case. 2 people have been charged with kidnapping but not yet had a trial or been convicted. An arrest doesnt confirm guilt. The girl this story is about is still technically missing, even though her family states her remains were found. Her mother went missing years ago and her remains were found close to where she was last seen.

I seriously doubt that the federal, state, and local law enforcement agencies have finished their investigation. Once the probable cause is file with what ever agency will prosecute, then you will know what they have been charged with.

I was wondering the same thing! I mean, it's kinda close!

Omg people.. they haven't been charged with murder yet because they haven't finished their investigation for the case. Til we know the manner of death, time leading up to it and how many victims (ruffly) we don't know which murder/ manslaughter/ so on charges to charge them with

I was wondering about that part in the story. Do the residents say the whole town is haunted?
Just wondered why it was even mentioned...maybe since it's close to Halloween?
Maybe that's why the story was so "allegedly" graphic.

Ky3 is report her home is on fire right now !

They are charging them with kidnapping to keep them in jail and not released. They'll compile more evidence and formally charge them once they have the case they need. If there are others involved they don't want to tip their hand and cause them to go into hiding. A case this big doesn't just come out in a couple of weeks.

I would worry about someone else that hasn't been caught. Who would've set the house on fire and rigged it with a bomb.

Only 25 minutes from Lebanon! 😬