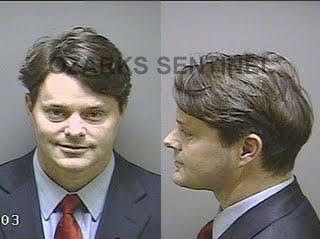 Sikeston police detective Bethany McDermott writes in the probable cause statement that, Jetton allegedly went to the victims home with two bottles of wine and "recklessly caused serious physical injury" to the woman by "hitting and choking her," causing her to lose consciousness.

The woman told McDermott that she didn't follow Jetton to the kitchen where he opened and poured the wine, but blacked out not long after drinking it. The woman says that she and Jetton talked about having sex when they were on the phone earlier in the day, but that she and Jetton have never dated or been in relationship before the night of Nov. 15

She told the detective that, as she was fading in and out of consciousness that night, she and Jetton agreed on a safe word of "green balloons" to use to stop sexual relations.

The woman told the detective, that before she passed out , she "recalls Mr. Jetton hitting her on the face very hard . . . remembers waking up; lying on the floor and Mr. Jetton was choking her."

When the woman woke up she told police that "Mr. Jetton was behind her having intercourse in the bedroom. The woman told McDermott that her memory was hazy but that Mr. Jetton stayed the night and when he woke up he gave her a kiss and said, "'you should have said green balloons."

The are two different narrative reports related to the alleged assault. The initial police report forwarded to prosecutors lists rape and felonious restraint....the other assault. So far prosecutors have only charged Jetton with assault.
-

Fired Up Missouri obtained the narrative report from the Sikeston police department after filing a Sunshine Law request:
[WOMAN] STATED THE NEXT THING SHE REMEMBERED, SHE WAS ON THE FLOOR IN THE LIVING ROOM AND MR. JETTON WAS TRYING TO RESTRAIN BOTH OF HER HANDS WITH WHAT APPEARED TO BE A LEATHER BELT. SHE STATED SHE WAS VERY GROGGY AND UNABLE TO SPEAK BUT WAS ABLE TO PULL HER HANDS FREE FROM THE RESTRAINT. SHE STATED AT THIS POINT, MR. JETTON BEGAN TO STRIKE HER ON THE LEFT SIDE OF HER FACE WITH AN OPEN HAND. SHE STATED AFTER THE FOURTH BLOW TO THE LEFT SIDE OF HER FACE, SHE BEGAN TO SEE STARS AND BLACKED OUT. [WOMAN] STATED SHE WAS UNSURE HOW MANY TIMES MR. JETTON HAD STRUCK HER AFTER SHE HAD BLACKED OUT.
The day after the alleged assault the woman went to her psychiatrist and he photographed her injuries. A few days after the November 15th attack, a detective wrote that investigators saw and photographed bruises on the woman's torso, thighs, breast and the impressions of a hand on her face and neck.

The Sikeston Police Department says that wine bottles and glasses were taken as evidence from the woman's home along with bedding and swabs from the couch and a chair. That evidence has been sent to the state crime lab to be analysed. Those tests could take up to three months to come back.

Jetton, 42, was elected speaker of the Missouri House in 2005 and left his office in 2008 because of term limits.
In 2007 Jetton became a household name in southwest Missouri when he attempted to get the "village law" passed into legislation. If it had passed it would have allowed developers to avoid oversight of county governments by incorporating small subdivisions into "villages."


-
A lot of people said that Jetton did that on behalf of late land developer Robert W. Plaster. Plaster had 400 acres of land near Kimberling City that he wanted turned into the Village of Table Rock. The Stone County Commission turned Plaster's request down, and a state appeals court upheld their decision in 2006.


Insert Jetton and his political influence into the equation; on August 28, 2007, the DAY the law went into effect, Plaster's attorney filed paperwork to create the Table Rock and filed a petition with the Stone County Commission to create the Village of Table Rock there. New "villages" would have been exempt from county jurisdiction like planning and zoning ordinances.
The village law was repealed in the next session.
Jetton and his wife, Cassandra, were divorced in October, four months after the former speaker filed for one.
Jetton now works as a political consultant at his business Rod Jetton & Associates in Jefferson City, although it appears that his influence in political circles has come to an end. His attorney, Stephen Wilson, says that Jetton "will be leaving politics by the end of the year to deal with false allegations and spend time with his family.: now a political consultant in Jefferson City.

Jetton is scheduled to be formally arraigned in Scott County associate circuit court on January 6th.

The former speaker of the Missouri House pleaded guilty today (05-26-11) to a reduced charge of misdemeanor assault in connection to the sexual assault of a Sikeston woman in November 2009.

Forty three year-old Rod Jetton, a Republican from Marble Hill, adamantly denied hitting or choking the woman during rough sex when he was originally charged with second-degree assault, however, today he admitted that he had indeed struck the woman and was placed on probation and ordered to pay the victim, Mary Elizabeth Lowe, $950 in restitution.

The Southeast Missourian newspaper reports that since Jetton has already paid the fine and court costs he has satisfied the terms of his probation and the conviction will be expunged from his record.
-
If Jetton had been found guilty at his trial that was scheduled to begin on June 2nd he could have faced up to seven years in prison.


From the Southeast Missourian report:
"(The woman) had previously testified in court that after finishing one glass of wine she started to drift in and out of consciousness. She also recalled waking up and Jetton had taken her into her bedroom and was having sex with her. She testified that there was a struggle that resulted in bruising to her face, neck, left thigh and right ankle.
"When she was questioned by the defense, (the woman) said she and Jetton had discussed in a conversation before they met that they would use the safe word 'green balloons' if intercourse got too rough."
Jetton served as state representative for Missouri's 156th District from 2001 to 2009. He was speaker of the Missouri House of Representatives from 2005 to 2009, before he termed out.
Jetton and his wife, Cassandra, were divorced a month before the assault; and a day after Jetton was charged in 2009, he closed his political consulting firm.
In an unrelated case in February, Jetton pleaded guilty in Butler County traffic court to amended charges of interfering with traffic by driving using excessive noise.  He was originally charged with carless and imprudent driving following a car crash in that case.
Posted by Kathee Baird at 1:08 PM